As a programmer, I consider my “development environment” an important part of the programming process. If you’re not comfortable with the tools on your desktop, you won’t be a happy programmer.
Lately, when I haven’t been braving the variance monster of the $15-30 games, I’ve been 3 tabling the $5-10 6 max games. I thought I’d share my poker environment, as the tools I’ve recently incorporated have boosted my win rate significantly.
Thanks to 3 Kings Halverson for all the links.
You can get rid of the dealer and player avatars here.
The numbers underneath each player come from the GameTime+ application, which can be found here. GameTime+ pulls numbers from PokerTracker onto the client screen.
My 1900 x 1200 resolution comes in handy when multi-tabling.
Now sign up on Party or Empire if you haven’t already. You won’t be sorry.
Click on the image for a close up. 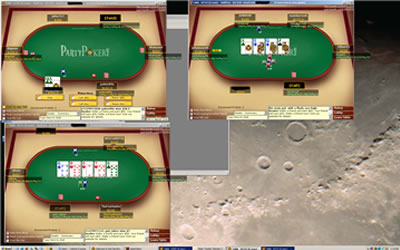 “One of the most sublime experiences we can ever have to to wake up feeling healthy after we have been sick.”
–Rabbi Harold Kushner
As far as bad beats go, it doesn’t get much worse than getting sick the day you arrive in Vegas. You get a few precious days in the gambling mecca, and you come down with a cold that wipes out your ability to calculate implied odds. Poetic injustice, if you ask me. Thankfully, the trip turned out alright, despite the minimal amount of poker that was played.
The cold pretty much destroyed all hopes of a proper trip report, so I didn’t bother taking notes. Hopefully my memory can penetrate the sleepless nights, cough syrup, and piles of phlegm and deliver you a somewhat entertaining report.
This trip to Vegas had come together beautifully: A while back, an old friend from the east coast (who goes by the nickname of Bourbon) told me he was headed to Vegas on 11/17. The same day, Iggy mentioned he was thinking about a trip for the same week. Excellent! I asked the boss if I could take Thursday and Friday off, and not only did I get them off, but got paid for them. Hard work apparently does pay off occasionally. So I was already up two days pay before the trip had even begun. Eventually, my longtime friend and Vegas companion M (see previous exploits here and here) and Mrs. Double free up their schedules and plan to make it down on Thursday.
All the pieces were in place for a great trip, and after an uneventful flight, I met Iggy in the bar to talk poker, blogging, and philosophy while downing a few beers at the bar. We got so wrapped up in the conversation that we never made it to the poker tables, deciding to save our energy for tomorrow. Oh the humanity.
Fast forward to Thursday morning, when I wake up sniffling and sneezing after a night of restless sleep. I try to convince myself that it’s a 24 hour thing, and that I’ll be fine by tomorrow, but deep down I know this cold has been a long time coming. After an afternoon of uneventful card-counting, I meet up with Iggy and we head out to the Luxor, where my tournament spreadsheet lists a $100 buy in tourney. It turns out that the tourney is $55, but we buy in anyway and sit down at a $4-8 table to wait out the hour before the tourney. I get rivered a couple times before discovering that tournament players start with 300 chips and the blinds are 10-15, increasing every 20 minutes. Ye gads. Talk about a crapshoot. Iggy and I get our tourney fee back, and immediately head over for some real poker at the Mirage.
We put our name on the list, and while wandering around the room I see a familiar face. “Henry?” he says, and sure enough, it’s none other than Rafe “Tiltboy” Furst, who somehow remembered me from our brief meeting at the WSOP. Rafe is playing in the Mirage No-Limit tourney, and invites me to the Celebrity Poker taping on Friday night. You can’t turn a tiltboy down, and he tells us that he’ll put us on the VIP list for tomorrow’s show. Sweet! (for the best trip reports ever, go check out the tiltboys site)
Iggy and I sit down at a pretty calm $10-20 table, and begin probing for tiltable players. Unfortunately, everybody is either a local rock or asleep, and we end up folding and sneezing away a few hours of boring poker. The only memorable hand was my pocket 8s on the button– 2 limpers, Iggy limps, and I call. I flop the boat, and slowplay until Iggy pairs his King on the turn. I get in a raise on the river, and resist the urge to slowroll the blogfather, dragging a nice pot.
Mrs. Double and M ring in to let us know they are a few minutes away, so we pack up (I end up down 5 bbs) and head for home base. At one point Iggy nearly falls out of my backpack after I bumped into a drunken frat boy near the blackjack table. Luckily, I kept my balance and a casino brawl was narrowly averted. It’s pretty late at this point, so after meeting up, the wife and I call it a night and leave M and Iggy in the bar. At this point, the cold is ravaging my body, and I’m feeling pretty zombie-like. At least we had celebrity poker to look forward to.
Day 2 was another uneventful day, and I did my best to see through the nyquil fog and mass quantities of phlegm to make the most of this vegas trip. Iggy and I did witness M go through a ridiculous run of bad luck at both the blackjack and craps tables, prompting the blogfather to give him the nickname “BAD LUCK SHLEPROCK,” after the little-known Flintstones character. As the dealer continued to pull 5 card 21s against Shleprock, you could almost see his tilt-meter going off the charts.


Meanwhile, Mrs. Double was absolutely killing the penny slots, racking up a couple $150 wins while Shleprock and I were getting slaughtered at the blackjack tables. I eventually joined her when the cold medicine blurred the cards, and promptly hit for $100. So much for positive EV games.
After dinner, we rounded up the crew and made our way to the Palms for some celebrity poker. We met Rafe out front, and enjoyed a few boxes of Full Tilt Poker breath mints before being escorted past the huge line of celebrity poker fans into the second row of the set. Unfortunately, we were forced to sign a waiver before the show, so I’m not sure what I can legally say about it.
What I will say is that the most famous of the celeb players was Heather Graham. Maybe it was Bad Luck Shleprock’s fault, but of course Heather picks the only seat right behind a huge pole, so she’s blocked from my vision. Rafe comments on the “seating bad beat”, and I try to handicap the players, but the nyquil prevents any calculations.
After a couple hours of horribly played poker (the celeb banter was pretty funny, as well as the commentary by Phil G and Dave Foley), the crew was itching to get back into action of some sort. We escaped out the back door, enjoying Andy Bloch’s tilt-inducing heckling of the celebs on our way out.
Unfortunately we never made it to the afterparty, but a big thanks goes to Rafe for hooking us up with the VIP treatment.
It was pretty much downhill from there. Shleprock and I continued to get mauled on the blackjack tables, and my cold got progressively worse. The one highlight was watching Iggy fight his way to 3rd in the $100 buy in tourney at the Sahara (Shleprock and I busted out simultaneously on different tables around 30th, as my trip aces went down to a flopped a set of fives). It just wasn’t my trip– of the 6 tables reserved for the tournament, I was moved THREE times in the first hour and a half. Just when I’d set up my image as a loose aggressive player, the table would break and I’d have to start from scratch. Ah well.
The wife continued to crush the penny slots the entire weekend, and ended up something like $350, booking the biggest win of all 4 of us. PosEv be damned!
I said my goodbyes to Iggy, wandering back to my room late Saturday night as cold rain poured down on us. I’d never seen it rain like that in Vegas.
But even after we left Vegas, the bad beats continued. On our way out of town, we heard reports of snow and ice on the 15 (the only freeway that connects Vegas to LA). California drivers can’t handle a little rain, so you can imagine what they do in snow and ice. 40 miles outside of Vegas, the freeway was gridlocked, and we decided to stop in at one of the State Line casinos (Buffalo Bill’s, for those who drive through there). Here we heard that the 15 was closed, and probably would be shutdown until tomorrow. The check-in line stretched about 200 yards long, and we decided to join the crowd rather than risk a 12 hour drive home.
Normally I’d be happy to stay an extra night, even at the state line, but at this point I was pretty beat. Maybe all the bad beats laid on me during the trip had passed, and I could actually win some money on this extra night.
Sure enough, I managed to quickly double up playing blackjack while Shleprock and I waited for a seat in the 2-6 spread game. We soon were called, and the game looked softer than warm butter. I won a couple hands, and eventually found the action table where the pots were up over $100 every hand.
Slightly up, and very worn down and annoyed, I decided to stir things up a bit. A guy across the table who thought he was the greatest player ever rubbed me the wrong way, and he challenged me to a heads up game. I immediately agreed, and the dealer asked the floorman if they could set it up (I’d been tipping well all night). Of course, the twit got scared and tried to back down, but the floorman saved him and said they couldn’t spread the game anyway. Ah well, it would have been fun. Thinking I had him close to tilting, I waited for the big hand.
About a minute after he’d challenged me, I see A9 on the button. He raises in late position, and I call. The flop comes A K 9 and he bets again. So I know he’s on AA, KK, or AK, but AQ is definitely possible (and would he bet out with any of these hands?). I raise, and everybody else gets out of the way. Twit calls, and the turn is an Ace. We go a few raises on the turn, and now I’m really worried about AK. Maybe I put him on tilt and he’s got KK? I slow down on the river and just call, and of course he turns over big slick.
Yes, Buffalo Bill’s has a jackpot. It’s Aces Full beaten. The jackpot was 12K.
It would have been a great ending to the trip, but of course, the qualifying jackpot hand was Aces full beaten by quads or better.
I ended up dead even for poker after a long night of getting rivered, and of course Shleprock busted out, continuing his streak of bad luck.
Thankfully, the trip home the next day took only 5 hours. The snow-covered mountains in the desert made for a beautiful drive home, and I even started to feel a little better.
Next trip… December 11th???
Thanks for reading, and Happy Thanksgiving!
6 Comments