If your mind is empty, it is always ready for anything; it is open to everything. In the beginner’s mind there are many possibilities; in the expert’s mind there are few.
–Shunryu Suzuki
I know I shouldn’t be complaining, but in the 4 years I’ve been in Southern California, this past week was by far the coldest I can remember. After growing up in Connecticut and spending some time in Sweden, I refuse to turn on the heat in my apartment, so it makes for some cold poker playing in front of the laptop. I also get to dress like the best coach ever, Bill Belichek, with my hooded sweatshirt, and somehow it makes me feel like a better poker player. 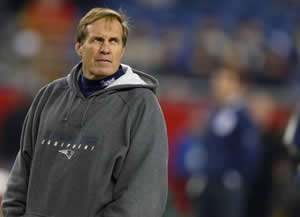 2. Loose Aggressive:
Loose-aggressive players are by far the most difficult opponents to play against. Since they will bet and raise with a large range of hands, raises don’t give us much information about the strength of their hand. In addition, loose-aggressive players will often call with monster hands, and like to make “tricky” plays. Thus, it’s difficult to using the betting actions of a loose-aggressive opponent to put them on a hand. I’ll usually call this type of player down with marginal hands (such as top pair, weak kicker or second pair, top kicker), and only re-raise when I’m quite sure that my hand is pretty far ahead.

Tight Players
Since tight players usually only play solid starting hands, it’s much easier to narrow down the range of hands they may be holding than it is for loose players. General advice when facing a tight player’s raise is to muck any hand (except the premium hands) and wait for a better opportunity. Also, I am extremely careful when any face card hits the board when heads-up against a tight player, since it’s unlikely he’s holding anything but two face cards or a decent-size pair. The tight player’s only weakness is that he is susceptible to bluffs when there are no cards in the playzone (9 through Ace) on the board.