“There’s nothing more dangerous than someone who wants to make the world a better place.”
–Banksy

Superhero stories were always my favorite.  When I was young (before the Internet!), the larger-than-life characters of Greek and Norse mythology captured my imagination, and I re-read them until the book fell apart.  As a teenager, I collected comic books, replacing Hercules and Thor with X-men and Avengers.  Recently, Alan Moore’s “Watchmen” and Christopher Nolan’s Batman movies reminded me that I am still in love with superheroes. 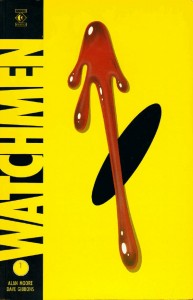 Occasionally, I come across a real-life character that is so different, so inspiring, so seemingly impossible, that they become superheroes.  As an American who loved sports, I grew up with superheroes like Michael Jordan and Barry Sanders.  Across the Atlantic, there are plenty of soccer (fußball here) superstars, but I’m more interested in strange superheroes that are different than than those you find in the states.  Recently, I couldn’t help but notice all of the strange artwork all over the old buildings in Berlin, and begin to wonder about the people making this art.

In the past, I regarded graffiti and “street art” as something mysterious and suspicious.  It seemed to me that it would be difficult for an artist to really express himself when he’s got only a few minutes to complete his work before the police show up.  But being in Berlin, a city full of street art and graffiti, at a time where I am trying to create my own art, has opened my eyes to this type of art.

In my experience, the attempt to create anything artistic is accompanied by massive amounts of self-doubt and insecurity.  How do you know if your stuff is any good? This is probably true for any “job” – when you first start out, you have no idea if the work you are doing is good or bad, and you have no ability to judge your own work. In most traditional jobs, there is some metric that gives you a rough idea of how you are doing. For example, if you’re an accountant, the amount of money you save your client is some metric of your skill at your job.  But art is so subjective that there is no real metric to measure your work by, especially if you are new to the job.

Personally, the transition from being very good at my job (at least, I believe I was very good at my previous job) to a world of self-doubt is not easy. Is anything I write any good? What exactly am I trying to say and am I saying it in a way that entertains people? (Those are rhetorical questions, so take it easy!)  This self-doubt and insecurity makes beginning artists hungry for some sort of validation or evaluation of their work by others.

There are some forms of feedback available to the beginning artist.  Feedback from friends, editors, readers.  These days, number of book sales or website visitors.  Money earned from the sale of the artwork.  But all of these “metrics” aren’t reliable ways to measure the quality of the artwork, because art and the experience of art is so subjective.  The classic example of a writer who never got this type of feedback is Kafka, who published only a few short stories during his lifetime, and never finished any of his books.  How would his writing have changed if “The Metamorphosis” was a bestseller during his lifetime?

Why do artists create art?  Solzhenitsyn wrote poetry from a prison camp without pen or paper and dying of cancer.   I don’t know if that makes his work “better,” but his desire to express oneself no matter what the external circumstances is admirable.  Somehow, Solzhenitsyn’s composing poetry in a death camp is sweeter than James Cameron sitting with graphic designers working on Avatar.   I guess I am a romantic at heart.

One of the most interesting things about street art is that the medium almost guarantees purity:

Aside from it’s purity, the other thing I loved about street art was its spirit of rebellion, this subversive, anti-authoritarian desire for freedom of expression.  It felt like the street artists had some secret existential truth to share with the world if only you could look at their art in the right way.  At the very least, they seemed to be doing something very different than filmmakers, actors, and writers.

For some years now it has been apparent that many of the world’s great cities have been taken over by street art.  The artists and activists who use the city streets to exhibit their work do so for an incredible variety of reasons.  Principally, they believe that by using the streets as a projection surface for their work, they are reaching a wider audience and not just a select group who visit galleries and museums.  Further, many street artists share the will not only to co-design urban space, but also to reclaim it from globally active companies and corporations whose advertising, logos and enticements to consume have virtually taken it over.  The artists take the reclaiming of public space as their right and use it to demonstrate new and alternative forms of expression in the city.   With their individual handwriting and unique images they create a counterpoint to the advertising images.

When I first moved to Berlin, I stumbled across this: 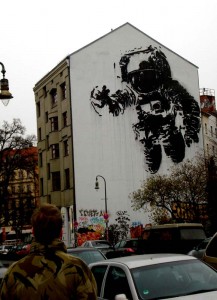 I remember when I first saw the Grand Canyon, I was awestruck.  But for years, I’d seen plenty of pictures and video of the enormous hole in the ground.  I was jealous of the old Lewis and Clark type people who stumbled upon the canyon without first seeing a photograph or hearing about it from some other traveler.  Somehow, having seen the Canyon so many times on a TV screen diminished the initial visual impact of the canyon. When I saw the side of that building, I felt like I had stumbled upon something completely different than anything I’d seen before.

Who made that?  How did they do it?  I asked around, and a few told me they thought it was done by the most popular street artist in the world  — a guy named Banksy — but it seemed not much was known about this mysterious artist from the UK other than his name (later I found out this was the work of an artist called “Ash“).  Maybe by now everyone in the States knows Banksy too, but I had never heard of him.  Perusing the bookshelf of my younger sister one night, I found a book written by him, and as I flipped through the pages, I was astonished by this mysterious character and this foreign world of street art that he had created.

The book mixed in short quotes from Banksy which accompanied his works.  This is my favorite:

People abuse you every day.  They butt into your life, take a cheap shot at you and then disappear.  They leer at you from tall buildings and make you feel small.  They make flippant comments from buses that imply you’re not sexy enough and that all the fun is happening somewhere else.  They’re on TV making your girlfriend feel inadequate.  They have access to the most sophisticated technology the world has ever seen and they bully you with it. They are The Advertisers and they are laughing at you.

However, you are forbidden to touch them.  Trademarks, intellectual property rights and copyright law mean advertisers can say what they like wherever they like with impunity.

Screw that. Any advert in public space that gives you no choice whether you see it or not is yours. It’s yours to take, re-arrange and re-use. You can do whatever you like with it.  Asking for permission is like asking to keep a rock someone just threw at your head.

You owe the companies nothing. You especially don’t owe them any courtesy.  They have re-arranged the world to put themselves in front of you. They never asked for your permission, don’t even start asking for theirs.

–From “Wall and Piece” by Banksy

The guy seemed like a real-life version of Loki.  A trickster who challenges established thinking and forces us to evaluate our own beliefs and the beliefs of those in power.  Apparently, my discovery of the real-life Loki was well timed — Sis told me that he had just made a film, which I watched in amazement/amusement, and left the theater feeling like the 8 year old version of myself that had just read a Norse myth for the first time.

So what is so inspiring about Banksy?

You’re walking down the street and you happen to glance at the wall, and you see this: 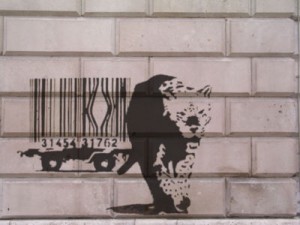 Wait a minute, that wasn’t there yesterday!  You stop walking and look closer, marveling at the fact that if you had been looking down a moment before, you would have missed it.  You look at the image, and see a leopard escaping his bar-code cage, coming right at you.  Look at the detail!  How did they do it?  Stencils?  There is this feeling that the artist put that on the wall specifically for you.  Not only for you, but you realize that not that many people will probably see it, and you’re one of the lucky ones.  You don’t have to go to a museum or an exhibition to see it, and it’s free.  You realize that the artist risked getting arrested in order to send you this message, and the only thing he’s really getting out of it is the enjoyment of giving you this message, whatever it is.  Why such effort?  You think, “whoever made this really has something to say…” You think about the minimum wage night-shift guys doing “inventory” at the supermarket with their scan guns…  You think about the idea that this supermarket world of bar codes and scan guns somehow seems undignified…

I think that Banksy and all the other street artists are so inspiring because they give us their work not for the money, or for the recognition, they do it because they care about us and they care about the world they are living in.  They have something to say, and it’s important to them that they say it in a way that people are going to listen and think about what it is that they are saying.

Enough words.  I will leave you with a few of my favorite Banksy works, worth a lot more than a thousand. 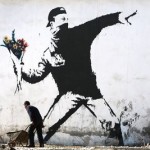 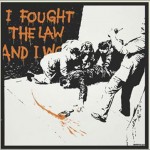 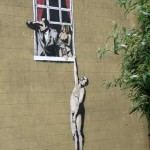 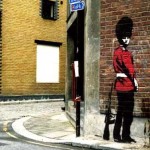 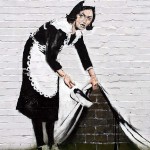 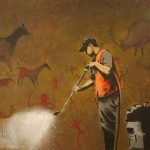