HDouble At The Movies: The Poker Wisdom of Rocky

Ever since I wrote about the poker wisdom that can be found in quotes from The Big Lebowski, I’ve found that poker players like movies. In all probability, they like posts about movies than dense thought-provoking posts about Morton’s Theorem. I’ve gotten a few requests for another movie post, and for a long time I just couldn’t find a movie that seemed to “fit” the game. But late one night, I popped in a DVD of the live No-Limit tournament at Turning Stone Casino. I was amazed to see an unknown 21 year old face off against two of the best in poker– Phil Ivey and John Juanda– and play without fear, and a heart full of courage.

D’Agostino was the classic underdog– an unknown online player whose most recognizable quality was reckless courage– pushing all-in against the best in the world with nothing. He had the eye of the tiger.

Everybody at the poker table is equal. Some people have more money than others, some have more experience, whatever. But once we buy our chips, everything is equal. The underdog gets the same number of cards as the pros, and then it’s up to chance and skill. It reminded me of one of my favorite movies… 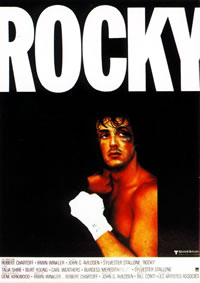 On the surface, Rocky is about the underdog boxer who courageously faces off against a champion who outclasses him in skill, but not in heart. But underneath this cliched theme is a movie full of comedy and wisdom that is made great by its subtlety (and outstanding acting). To me, Rocky is about a guy who stumbles upon a great opportunity and makes the most of it. And in essence, poker is about making the most of your opportunities at the table.

So let’s cut the chit chat and get to the quotes:

Rocky’s famous orders to his cutman show his commitment to his goal, and mirror the commitment of the poker player who’s sitting in a great game but getting pummeled by river card after river card. The Rock tells Mickey to cut his eye open to prevent the doctor from stopping the fight. The Rock knows that this is his one chance to do something great in his life, an opportunity that he can’t afford to let slip by. No matter what the cost (in this case, a big scar on his face at the least), he’s got to continue this fight.

I’ve often feel like I’m being beat up by Apollo Creed when sitting in the no fold ’em low limit games and my opponents keep catching their runner-runner hands to crack whatever monster I’m holding. One of the sadistic ironies of poker is that the most “theoretically” profitable games are also the most painful. Games where your opponents chase to the river with any two cards are the ones where you make the most money, but they are also the games where you will take the most bad beats. Expected Value and actual profit quite often do not match up, and a few bad beats can turn a session that would have been a monster win into a huge loss.

Rocky’s tough enough to sacrifice his face to give himself a chance to succeed in the greatest opportunity of his life. As poker players, we’ve got to grit our teeth through the bad beats, and not let a tough hand keep us from playing our normal game. A great poker player must have the courage to remain in a good game despite painfully improbable bad beats. So the next time you lose to runner-runner in a monster pot, think of the Rock and say, “Cut me, Mick.” 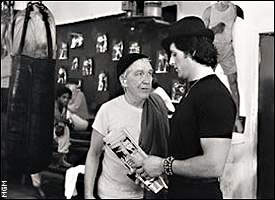 This quote goes out to the creators of Rounders (David Levien and Brian Koppelman) for selling their souls to bad TV with the pilot episode of “Tilt” on ESPN. Mickey explains that the reason that he gives Rocky a hard time is because the Rock sold out on his hope of boxing for a little extra cash. Levien and Koppelman were able to make a great movie about poker with Rounders, and now are freerolling on a new, heavily advertised TV poker drama on ESPN.

Rather than capture the subtlety of the game or develop interesting characters, the writers choose cliched characters who belong more to a soap opera than a poker game.

I’m not going to rant about the growing tendency for television to insist that cliche and dramatic formula is more interesting than originality and complex characters. I expected more from the creators of Rounders, who had the talent to make a great show about poker, but instead became a name tag for a second rate soap opera.

ANDY: Where are the real fighters? The pros. Today we jig clowns.
ROCKY: Clown.
ANDY: Yeah.
ROCKY: He took his best shot an’ became champ — What shot did you ever take?
ANDY: Yo, Rock, you ain’t happy with yourself? Fine. But me, I got a business here — I don’t need to take no shot.

One of my favorite discussions in the movie talks about “taking a shot” in life– risking everything you have to achieve something beyond the ordinary life. Rocky’s question to the bartender, “What shot did you ever take?” goes out to David Sklansky, who seems to enjoy taking shots at people from his 2+2 tower, but rarely puts his money on the table.

One might argue that Sklansky did take “his best shot,” and published several books that were hugely successful. However, his trash-talking gets under my skin, probably because he poses as a dignified authority on poker (while sniping away at good people on public message boards). While Sklansky’s theory is superb, his ability to communicate his ideas is extremely lackluster, and ends up frustrating many readers.

I’m suspect of any poker “authority” who avoids risking money in the game they claim to be expert in.

ROCKY: After a rough fight, ya’ nothin’ but a large wound. Sometimes I feel like callin’ a taxi to drive me from my bed to the bathroom… Ya’ eyes hurt, ya’ ears hurt, ya’ hair even hurts… But the thing I’m proud of is I been in over sixty fights an’ never had a busted nose — Bent an’ twisted an’ bitten but never broke… that’s rare.
ADRIAN: Why do you do it if it hurts so bad?
ROCKY: … Guess.
ADRIAN (pause): ‘Cause you can’t sing or dance?

Rocky’s explanation of why he decided to be a boxer goes out to all the wannabe poker pros out there. There was a short time when yours truly wondered what it would be like to live the lifestyle of a professional poker player. No bosses, no alarm clocks… just you and the cards.

For a while it seemed like the ideal life… and I was reminded of my dream of playing football professionally. Ever since I was a kid, I had dreamed of playing football for a living. Unfortunately, because of 2 knee injuries and some genetic constraints, this dream ended up being pretty hard to achieve.

I did get an opportunity (through teammates) of making a meager living from small teams in leagues throughout Europe. However, I turned it down, for many reasons that have nothing to do with “Rocky.” But of all of the players I’d met that were hanging on to “minor league football,” they’d all told me that the lifestyle was brutal and they wouldn’t be doing it if they could get a “real job” somewhere else. Your body just takes a beating playing week after week at that level, and although the game itself is fun, after 20 weeks of pounding, some of the fun disappears.

My point is that while professional poker may be fun, it’s probably not as fulfilling as “singing or dancing.” Paul Phillips pointed this out in a recent interview: “If you’re smart enough to succeed at this game, you’re smart enough to succeed in the real world, with much greater satisfaction. If you don’t want to work for ‘the man’, then start your own company and put your efforts into that.” But at least broken noses are relatively uncommon fro pro poker players (except for those seen on ESPN’s “Tilt”).


Reporter: Where did you get the name, “The Italian Stallion”?
Rocky: Oh I made that up one night while I was eating dinner.

This one goes out to Russ “Dutch” Boyd and “The Crew” for the dumbest nicknames around. I guess I’m not one to talk with “HDouble,” but hey, I’m not famous. 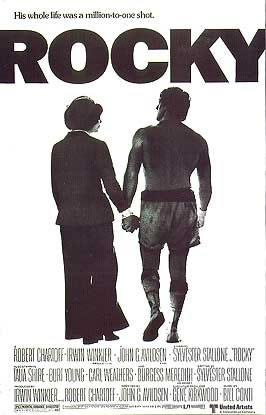 Rocky: I can’t do it.
Adrian: What?
Rocky: I can’t beat him.
Adrian: Apollo?
Rocky: Yeah. I been out there walkin’ around, thinkin’. I mean, who am I kiddin’? I ain’t even in the guy’s league.
Adrian: What are we gonna do?
Rocky: I don’t know.
Adrian: You worked so hard.
Rocky: Yeah, that don’t matter. ‘Cause I was nobody before.
Adrian: Don’t say that.
Rocky: Ah come on, Adrian, it’s true. I was nobody. But that don’t matter either, you know? ‘Cause I was thinkin’, it really don’t matter if I lose this fight. It really don’t matter if this guy opens my head, either. ‘Cause all I wanna do is go the distance. Nobody’s ever gone the distance with Creed, and if I can go that distance, you see, and that bell rings and I’m still standin’, I’m gonna know for the first time in my life, see, that I weren’t just another bum from the neighborhood.

Rocky’s most inspired and introspective speech in the movie stresses a concept that may be the most important in being a successful poker play: performance matters, results don’t. The old saying, “it’s not whether you win or lose, it’s how you play the game” comes to mind, although I never really liked the sound of that one. Rocky realizes that results– winning the fight– are not the only thing that matters, and adjusts his goal accordingly. Rather than thinking that “winning is the only thing,” Rocky focuses more on performance.

The somewhat subtle thing here is that Rocky’s realization– that he is outmatched and victory may not be his main goal– allows him to actually have a chance at victory that he wouldn’t have had if victory had been his goal. Got that? If Rocky had been focused solely on victory, he may have quit when confronted with the reality of Apollo’s superior talent in the ring. However, since the Rock only wants to “go the distance,” he gives himself a shot at victory. Rocky’s performance based thinking allows him to make the most of his once-in-a-lifetime opportunity.

In poker, we should strive to make the best decision we can for every hand we play. If the cards don’t fall our way, it’s not important– we’ve given ourselves an opportunity to win by playing our best. In the long run, we’ll be rewarded like Rocky.