HDouble At The Movies: The Poker Wisdom of The Good, The Bad, and The Ugly

“Hard work spotlights the character of people: some turn up their sleeves, some turn up their noses, and some don’t turn up at all.”
–Sam Ewing
Welcome, faithful readers! For those of you still checking on this blog every so often, I appreciate your loyalty and want you to know that I’m still alive and well, despite the lack of posts recently. Things have been hectic at the fastest growing online poker room, which doesn’t leave much time for playing poker, much less blogging about it. The good news is that all of the poker bloggers hard work at the LA BloggerPlex (FHWRDH, Geek, RDub, and Rini round up the lunch crew) is paying off– the site is starting to get more players, more games, and more tournaments, and we’re hard at work on new features.
In the little free time I’ve had, I’ve been riding the variance at the big limit games at Party, getting killed at the LA Poker Blogger home games, and lately, experimenting with Poker Bot implementation. There’s been a lot of buzz about bots lately, but I think writing a good bot is still a few months away. Poker is so dynamic that it’s very difficult for any non-human to keep track of all the variables required to make good decisions at the table. But as a student of Artificial Intelligence and Poker, the idea of a poker-playing algorithm is about as cool as it gets.
I don’t usually like to bring the non-poker world into this blog, but the recent tragedy in New Orleans hit close to home. My Mom grew up in New Orleans, and had family there when Katrina hit. Both of my parents went to Tulane University, so it’s safe to say there’s a lot of New Orleans in me. The scope of the disaster is a little bit beyond my comprehension, but for my Mom and everybody who was close to the city, it must be pretty tough to deal with. I’m sure all the help that everybody’s giving is much appreciated, and it makes me happy to see all the support for those who have a long road towards recovering their lives.
So, in tribute to the people of New Orleans and the spirit of American toughness, I’m going to offer up a few bits of poker wisdom from one of my favorite movies of all time:
HDOUBLE AT THE MOVIES: THE POKER WISDOM OF THE GOOD, THE BAD, AND THE UGLY 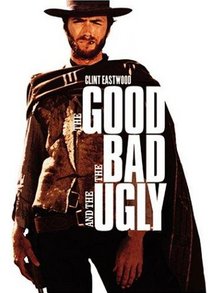 The Man With No Name has all the characteristics of a great poker player: courage, nerves of steel, and a poker face like Chris Ferguson. Most importantly, nothing rattles him– his stoicism under pressure keeps him cool enough to outduel the master gunman Angel Eyes, while his sharp mind outwits the devious Tuco. There is much to be learned about poker from The Man With No Name.
***
Man With No Name: Two hundred thousand dollars is a lot of money. We’re gonna have to earn it.
This simple quote from Clint says more than it would appear — when everyone else thinks that finding the gold is going to be easy, The Man With No Name knows that when that much money’s involved, nothing’s easy. The new world of online poker is full of people thinking they’re going to get rich quick after they’ve had a couple of big winning sessions. When variance is on your side and the cards are going your way, it’s easy to think that being a poker pro is a piece of cake. And although I’ve never played professionally, I believe that success in poker is achieved in the same way as in any other job– discipline, hard work, and concentration. If you want to be successful in poker, you might be one of the lucky ones, like Gus Hansen or Tuan Le, but most likely, you’re gonna have to earn it. As they say, playing poker professionally is a hard way to make an easy living. 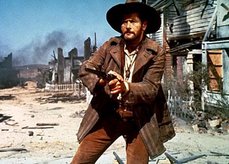 Tuco: You never had a rope around your neck. Well, I’m going to tell you something. When that rope starts to pull tight, you can feel the Devil bite your ass.
Those of you that have ever played on a short bankroll or at a limit that’s a little uncomfortable know what Tuco’s talking about. 3 or 4 bad beats at the start of a session and you feel that rope tightening and if the run is bad enough, you wonder if your poker life is at stake. But Tuco’s a gambler, and the only way he knows how to get ahead is to put his neck on the line. And I’m not advising you to play on a short bankroll or above your head, but putting your neck on the line– or at least putting something at risk– is what poker’s all about. T.J. Cloutier says that if you’re serious about poker, you’ve got to play stakes where you can win at least as much per hour as you make working. Anything less and you might as well work instead. The point is, serious poker requires the element of risk. In order to feel the exhiliration of victory, you’re going to have to also feel the Devil biting your ass every so often.
One Armed Man: I’ve been looking for you for 8 months. Whenever I should have had a gun in my right hand, I thought of you. Now I find you in exactly the position that suits me. I had lots of time to learn to shoot with my left.
[Tuco kills him with the gun he has hidden in the foam.]
Tuco: When you have to shoot, shoot, don’t talk.
Tuco’s quote addresses something that is a pet peeve of mine– when you sit down to play poker, play poker. Don’t instant message people, read RGP, watch TV or anything else except play poker. When you’re putting your money on the line and playing a game that requires full concentration, there’s no reason to divert your attention doing anything else but play poker.
The Man With No Name: After a meal there’s nothing like a good cigar.
In a rare moment of relaxation, The Man With No Name enjoys a break from the action by smoking a cigar. You get the feeling that he is preparing himself for future trials, while also celebrating the fact that he’s alive. Poker can be so much of a grind that if we don’t take some time out to celebrate our victories, the game can get a bit too abstract. Izmet offers the following advice as to how to connect the poker world to the real world:
“Build a bankroll. Treat it as a funny money. Have enough to withstand challenges of fate. Do not spend the winnings. After a while, if the game is good to you, buy yourself something out of the bankroll. A shiny gambler’s watch maybe. A little token of pride. A mark of achievement. You will feel good about yourself, that’s never a bad thing.”
Remember to celebrate your victories– poker should be fun when you’re winning.
Tuco: That’s so. Even a tramp like me, no matter what happens, I know there’s always a brother who won’t refuse me a bowl of soup.
Even “The Ugly” Tuco has someone to turn to when everything goes wrong. Of course it’s important to have someone to lean on when things aren’t going well, but it’s even more important to poker players. The swings of variance can be extremely difficult emotionally, even for the most stoic poker player. I’ve met a lot of people that seemed to get sucked in to the poker world, with little else outside their life besides pot odds and hourly win rate. Poker is a great game, but those who are “inside” the game 24 hours a day have no time to reflect on their play and their game cannot improve. There’s more to life than the best hand holding up. 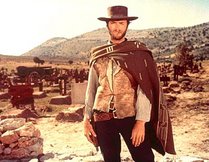 Tuco: [shouting] Hey, Blond! You know what you are? Just the greatest son-of-a-b-!
The last lines of the movie feature Tuco’s exasperated screams addressed to The Man With No Name as Clint rides off into the sunset. The Man With No Name leaves Tuco hanging, literally. The hero breaks his word in order to protect himself and the potential threat of the devious Tuco. This fits with the typical poker advice that “there are no friends at the poker table” and that the only person you should be looking out for is yourself.
But in a final twist, the closing scene shows The Man With No Name return to mercifully shoot Tuco from the noose, freeing him and fulfilling his end of the bargain. The lesson: those who value honesty and compassion will be rewarded more than those who only look out for themselves. One of the reasons The Man With No Name is able to survive all of the movie’s trials is because he adheres to his principles and is able to act with confidence. Many people may disagree, but I think that even at the poker table, a purely selfish approach won’t lead you as far as a more compassionate approach in the long run.