By hdouble February 16, 2011 February 16, 2011 Uncategorized
It is said that what is called the Spirit of an Age is something to which one cannot return. That this spirit gradually dissipates is due to the world’s coming to an end. In the same way, a single year does not have just spring or summer. A single day, too, is the same. For this reason, although one would like to change today’s world back to the spirit of one hundred years or more ago, it cannot be done. Thus it is important to make the best out of every generation.
–Ghost Dog
It’s been getting a bit heavy here in this blog, so I thought I would try something other than a depressing, serious, and introspective post.  Something that I’ve been thinking a lot about recently is my relatively unique relationship to computers and the Internet. As I said in my last post, I belong to a relatively small group of people that are just old enough to remember life before the Internet, but also had a computer for as long as they can remember.  I was only 5 when my Dad brought home our first PC in 1982, and after a few years building up my patience on the Bulletin Boards (I remember waiting hours to view a single GIF image — one line at a time would appear on the screen), we began dialing up to Prodigy starting sometime in 1988 or 89.  So at age 11 I started using this baby version of what would eventually become the Internet as we know it today.

At that time, very few people around me even knew what computers were, let alone the meaning of the words “Internet” or “Email”.   TV was everything then — and I guess it still is — but I probably spent as much time on the computer (mostly playing games) as I did in front of the tube.  Back then I felt like I knew everything about the Internet — which was possible because there really wasn’t that much to know.  WebCrawler and Lycos, the first “real” search engines, didn’t come around until 1994 (I was 17), so really there wasn’t a whole lot of interesting stuff you could find until then.

Why am I bringing this up?

I guess because as I get older and look around, the most important things I see happening today are all happening on the Internet.  I am thinking about becoming an Internet Evangelist.  But in the past, although I knew everything about the Internet, I didn’t get to see much outside of the online poker world during the past few years.  So I’ve been using much of my newfound free time to catch up on what I’ve missed over the past 5 years.

And what better way to explore the best of the Internet than through the quotes of one of my all-time favorite movies?  It always made me a little bit sad that the best Cards Speak posts were movie quote posts. I liked to think that my musings on how poker connected to life were far better, but I guess it depends on what your metric of measurement is.

Oh, and if you want to spare yourself from future introspective posts, please feel free to submit a question or comment for a “Reader Mail” column — if I get any questions, I will do my best to answer them.
*** 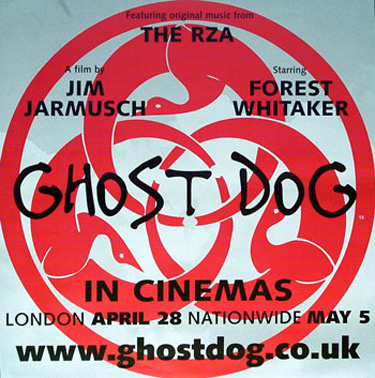 One of the reasons I like Ghost Dog so much is because I love the way it captures the conflict between Old School (ritual and tradition) and New School (modern cultural practices).  The Internet allows us to communicate and consume information in ways that are new and different, challenging a lot of the old rituals and traditions.

Sonny Valerio: What the fuck is his name?
Louie: Ghost Dog.
Sonny Valerio: What?
Louie: Ghost Dog.
Sonny Valerio: Ghost Dog?
Joe Rags: He said Ghost Dog.
Louie: Yeah. He calls himself Ghost Dog. I don’t know, a lot of these Black guys today, these gangster-type guys, they make up names like that.
Ray Vargo: Is that true?
Sonny Valerio: Sure. He means like the rappers, you know, All the rappers, they got names like that: Snoop Doggy Dogg, Ice Cube, Q-Tip, Method Man. My favorite was always Flavor Flav from Public Enemy. You got the funky fresh fly flavor.
[rhymes hip-hop verse]
Ray Vargo: I don’t know about that, but it makes me think of Indians. They got name like, uhh, Red Cloud, Crazy Horse, Running Bear, Black Elk.
[makes elk noise]
Sonny Valerio: Yeah. That kind of shit.
This quote goes out to all the weird stuff that you find on the internet and the way that it changes the people using it… A friend of mine pointed out a popular theory that captures the unique magical power of the internet to change a normal person into an asshole:

I am all for anonymity, but it’s pretty depressing to think if people didn’t have to own up to their opinions and behavior, there would be a lot more assholes in the world.  Plato discusses this in more detail for you philosophy fans out there.  And apparently (Wikipedia told me) there’s a related topic called “Online Disinhibition Effect”. That’s another great thing about the Internet — not only has it all been done before, with Google you now have the ability to immediately discover whatever it is you’re thinking about has already been researched and written about extensively.

I am not going to get into it here, but this is probably going to change soon.   A certain really popular website is quickly ending anonymity on the web.  A good friend said it well in an email he sent this morning:

“Took me a while to “get it” but Facebook’s equivalent is the “real person” profile. They have beat this drum from the beginning. The days of anonymity have been erased.”

This is probably a good thing in the long run, but I will certainly miss some of the laughter that comes from the more creative examples of flaming that have developed over the past few years.  My old school prank call favorite still beats all the new ones. I could go on about anonymity but I am trying not to be a fuckwad here…
Sonny Valerio: Where’s he live?
Louie: Fuck, if I know. That’s the next strange thing. I mean, I can’t just call him up. Instead, he contacts me every day through a bird.
[pause]
Sonny Valerio: Did you just say he contacts you through a bird? Did I just hear you say that?
Usually I stay away from literal interpretations of quotes, but this one is too good to pass up.  One of my favorite things about the Internet is that it’s got it’s own geek language, with layers and layers of inside jokes.  That image by itself isn’t that funny, but used in “conversation” it gains a ton of power. I mean, how can you not laugh when somebody tricks you into clicking a link like that?  Maybe someday words won’t be necessary anymore, we will all just pass images back and forth, no words necessary. 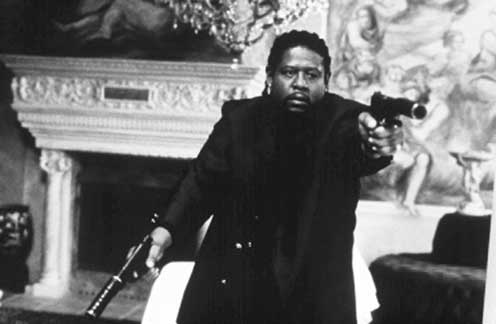 Pearline: Can’t you understand what he’s saying?
Ghost Dog: No, I don’t understand him. I don’t speak French, only English. I never understand a word he says.
Pearline: And that’s your best friend?
Ghost Dog: Yeah.
I could probably write a lot about “lovable losers” and “unintentional comedy” here, but instead just watch this clip.  Before the Internet, it was a lot tougher to find gems like this.

Ghost Dog: Even if one’s head were to be suddenly cut off, he should be able to do one more action with certainty. With martial valor, if one becomes like a revengeful ghost and shows great determination, though his head is cut off, he should not die.
There are some people who just have to express themselves, no matter what the consequences.  The great determination of these individuals to make their voice heard is commendable, even when the sound is a bit hard on the ears.  Hats off to anyone having the courage to put themselves out there (especially this guy).

Louie: Nothing seems to make sense anymore.
Maybe I am just getting old, but kids these days confuse me.  I don’t even know why I find this is so funny, which disturbs me.  Hopefully I am not the only one that understands very little about these types of things and why they are so funny to me.

Ghost Dog: It is a good viewpoint to see the world as a dream. When you have something like a nightmare, you will wake up and tell yourself that it was only a dream. It is said that the world we live in is not a bit different from this.
My favorite quote of the movie goes out to those folks on the Internet who make us look at things in a different light.  I actually liked this song when I was a kid!

Ghost Dog: Among the maxims on Lord Naoshige’s wall, there was this one: “Matters of great concern should be treated lightly.” Master Ittei commented, “Matters of small concern should be treated seriously.”
This deep and difficult-to-interpret quote goes out to those who sweat the details.  My interpretation is that humor is important when dealing with difficult issues, but should give way to seriousness when we need to “sweat the small stuff.”

Samurai in Camouflage: Ghost Dog, power, equality.
Ghost Dog: Always see everything, my brother.
I’m still waiting for someone to invent the ultimate “Internet Awareness Console,” (probably in development by Google).  I mean, I’ve been out of it for 5 years, so help me out here folks — are there any good sites that do better job than Digg, Stumbleupon, Reddit, etc. at giving you the best stuff on the Internet? If anybody out there has any good way of doing this other than subscribing to and sorting through hundreds of RSS feeds, please email me and let me know.  And please, email me a question you want answered here so I don’t have to think about what to write next.

Until next time, thanks for reading, and always see everything!