Since I got so many comments about the wisdom of The Dude, tonight’s post picks up where we last left off. For you loyal readers, I give you more from Walter, The Dude, and yes, Jesus.
The Dude On Swimming With the Fish
~
We’ll start it off with a contribution from Chris H.:
Walter: Do you see what happens, Larry? Do you see what happens when you fuck a stranger in the ass!
Chris says: This is when some yahoo sucks out on you all night long and you mark them separately only to track them down on subsequent nights and take all their money.
I’m going to add that what usually happens when you track some lucky fish down and go after him is that some other shark at the table ends up catching you blindsided during your effort to hook the fish. Like Walter, we end up on the wrong end of the crowbar, watching our monster pot be pushed to the unknown 3rd party as we stare sadly at our fish.
~
Walter Sobchak: Am I wrong?
The Dude: No…
Walter Sobchak: Am I wrong?
The Dude: You’re not wrong, Walter, you’re just an asshole!
This one goes out to the jerks that insist on check-raising the fish at a friendly table. This doesn’t really apply to online games, because it’s much harder to “embarrass” people with a well-timed sandbag, but in live play a check-raise can destroy a live player’s mood. Too many times I’ve seen it– some drunk old guy enjoying himself, playing every hand, just giving away his chips to the rest of the table. Then some expert slowplays a set and punishes the guy, pissing him off and embarassing him at the showdown. The laughter ends, the smile turns into a frown, and all of the sudden the fish tightens up or leaves the table. Don’t be an asshole to the folks who are having fun donating to your bankroll.
~ 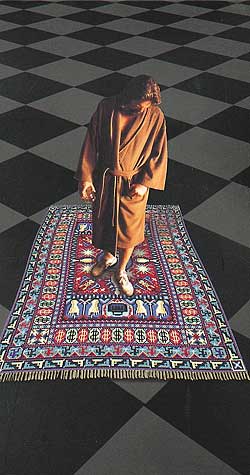 The Stranger: I guess that’s the way the whole durned human comedy keeps perpetuatin’ itself.
This quote from the mysterious stranger explains the popularity of hold ’em: the weak players stick around because no single hand is that much of an underdog. As hold ’em players, we have to understand that the reason the fish always come back is because any two cards really CAN win. Pocket Aces only win 35% of the time against 8 random hands. Part of the thrill for the gamb00lers is cracking those Aces, feeling the rush of the underdog victory on the river. The grinder knows that in the long run, the rockets will hold up, and the fish will give all of his money away. Hold ’em “perpetuates itself” because the fish win enough on occasion so that the game still attracts them, and the grinders who play the odds will get their fair share in the long run. Realize that bad beats are the reason that you can make money in the long run. Poker ain’t chess.
~
The Dude: Fortunately, I’m adhering to a pretty strict, uh, drug, uh, regimen to keep my mind, you know, uh, limber.
There’s a lot of different opinions about drinking at the table. Coming from the card-counting world, blackjack players say that drinking provides more “cover” than any act, and that a drink goes a long way towards confusing the pit bosses. Of course, it’s pretty hard to division to 2 decimals after 6 free drinks, but it never stopped me from trying. I’m not going to get into the whole table image discussion, but in a friendly game, a beer can go a long way towards disguising your shark-like nature. Without a drink, I look like a calculating math student (I never got any points for looking friendly). With a beer in hand, the jovial player across from me may get curious and pay me off on the river to see what I have. For other drugs, you’ll have to consult an expert.
~
The Dude: We’re screwed now! We don’t get shit! They’re going to kill her! We’re fucked Walter!
Walter Sobchak: Nothing is fucked Dude. C’mon, you’re being very un-Dude.
This quote would have done me well when I was starting out: don’t get all worked up over one horrible session. As long as you’re not putting your whole bankroll on the table, you’ll bounce back. One of my worst days ever was a marathon session on Thanksgiving, where I went on tilt after a slew of bad beats. I lost about half my bankroll because I lost focus and got desperate. I took a few days off, and went on a 2 month run where I left nearly every session a winner. The Dude loses his cool because he loses his perspective. You will have bad sessions, just like you have great sessions. Keep your cool– a bad session is just a bump in the single long session that is your poker career.
~
Walter Sobchak: You have no frame of reference, Donny. You’re like a child who walks into the middle of a movie…
Back when I was starting out, I’d sit down at a wild table and play my usual tight-aggressive game without getting a read on the table before I played my first hand. I’d raise with my JJ, only to find it capped with 8 players in by the time it got back to me. Don’t wander into a loose-aggressive game without knowing what you’re getting into. It’s important to get a feel for the texture of the game at a given table before you jump in and get crushed on your first hand. Let the blinds go round and play tight for an orbit until you get a read on your opponents.
~
Dude: We’re talking about unchecked aggression, here!
The Dude’s quote echoes the elder Bush, and recalls a theory that beginners often fail to fully understand: the “raise or fold” axiom that many pros advocate. While this tactic is the only way to succeed in tight games, it is the worst possible way to play in a loose-passive game. I remember one of my first $6-12 sessions where I dropped 30 big bets at a no-fold ’em game at Hollywood Park. Showdown after showdown I was shown some ridiculous hand, and I left cursing my luck. But after reflecting on the way I played, I realized that tight-aggressive doesn’t work when you’re playing against an 8-headed fish. I read up on Morton’s Theorem and understood the adjustments required to play in a no fold ’em game. Sometimes you need to check your aggression, and check the best hand against a school full of fish.
~

Jesus Quintana: What’s this day of rest shit? What’s this bullshit? I don’t fuckin’ care! It don’t matter to Jesus. But you’re not foolin’ me, man. You might fool the fucks in the league office, but you don’t fool Jesus. This bush league psyche-out stuff. Laughable, man – ha ha! I was gonna fuck you in the ass Saturday. I fuck you in the ass next Wednesday instead. Wooo! You got a date Wednesday, baby!
One of my favorite things to see is two players going at it in chat after one of them lays a vicious beat on the other. It seems to always lead to a heads-up challenge, with the suckout artist always saying: “Go set up a table, I’m there (followed by a stream of profanity).” One of the players always ends up saying “I’ll only play if it’s a $1K freezeout or higher.” Yeah, like the low limit fish is going to agree to that. Bush league psyche-out stuff. Laughable.
~
The Dude On Tournaments
Jackie Treehorn: “I deal in publishing. Entertainment. Political advocacy.”
Jackie Treehorn’s justification of the porn industry strangely mirrors the way poker is presented to the mainstream. This quote goes out to
Cardplayer magazine and the “poker media.” The American public is obsessed with celebrity, and the poker media does their best to make celebrities of the winners. The tournament winners are presented as brilliant and respectable superstars, when in reality most of them are not the best role models. Although there are plenty of stand-up superstars, my gut tells me the guys that are really cleaning up aren’t gonna appear in CardPlayer anytime soon (with the exception of Paul.
~
Jesus Quintana: Let me tell you something, pendejo. You pull any of your crazy shit with us, you flash a piece out on the lanes, I’ll take it away from you, stick it up your ass and pull the fucking trigger ’til it goes “click.”
One of the best quotes in the movie, from the most over-the-top character, goes out to the idiots who refuse to “check down” the best hand against an all-in player in the late stages of the tourney. Too many times I’ve seen a 3-way pot at the final table, where one player is all-in, and the other two end up heads-up for the side pot on the turn. They fail to understand that checking the best hand is their best play here, unless they have a monster. What can happen when the heads-up players don’t check it down is that the best hand is folded, and the all-in player ends up winning the main pot. If it’s checked down, the all-in player is busted, and the other two players have bumped themselves up one notch in the money. If I’m ever in a heads-up situation like this and I get bluff raised all-in, I’ll be reciting this quote in my head.
~
Walter Sobchak: You have got to buck up, man. You cannot drag this negative energy in to the tournament!
The Dude: Fuck the tournament… Fuck YOU, Walter!
[pause]
Walter Sobchak: Fuck the tournament? Alright, I can see you don’t want to be consoled here, Dude. Come on Donny, let’s go get us a lane.
200+ player tournaments last forever. When you sit down for one of these things, you’re in for the long haul. Don’t buy into a tourney on impulse, unless you want to throw your money away. If you’re gonna play a big tourney, be prepared for 5 hours of uninterrupted play, and make sure you have some reading material. All it takes is one mistake and you’re gone, so be ready for a long, grueling battle.
~
Walter Sobchak: Is this your homework, Larry? Is this your homework, Larry?
The Dude: Look, man…
Walter Sobchak: Dude, please? Is this your homework, Larry?
The Dude: Just ask him about the car.
Walter Sobchak: Is this yours, Larry? Is this your homework, Larry?
The Dude: Is that your car out front?
Walter Sobchak: Is this your homework, Larry?
The Dude: We know it’s his fucking homework! Where’s the fucking money, you little brat?
This one goes out to the worst play in online poker– the infamous disconnect. Party is finally going to disable this in Multis, but even at $3-6, I’ll see some clown time out on the river after I check-raise them, and then they’re immediately back when the next hand is dealt. It’s one big bet, suck it up. If you see somebody type “Where’s the fucking money, you little brat?” in the chat after an obvious plug-pulling, you’ll know who it is.
~ 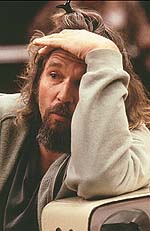 Thanks for reading… now go meditate on the wisdom of the Dude. I’m closing the book on The Dude with the movie’s closing quote, and the promise that the winner of this year’s WSOP winner will be an unknown Dude. Anybody wanna bet?
“The Stranger: The Dude abides. I don’t know about you but I take comfort in that. It’s good knowin’ he’s out there. The Dude. Takin’ ‘er easy for all us sinners. Shoosh. I sure hope he makes the finals.”