Zen and The Art of The Dude

It’s been a crazy week at work, and aside from a good session on Monday night, I haven’t been on the tables. I have been working with my best friend, poker prodigy “Monk,” who’s been dominating the $1-2 tables and quickly moved up to two tables of $2-4. It’s a lot of work to review hand histories, but I think it’s helping my game, and I get a lot of pleasure out of seeing his development. 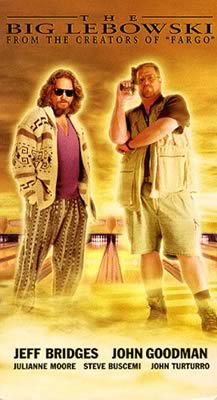 The first quote goes out to the idiots who insist on lecturing the fish and showing everyone at the table how smart they are. I don’t know who said it first, but “don’t tap on the aquarium glass!” Too many times I’ve seen some sucker throwing his money away… of course he finally sucks out on some “pro,” who asks him how he can call 3 bets with 98o. The fish plays a couple more hands, being berated the whole time, and promptly leaves. Keep your gun in your pants, Walter. 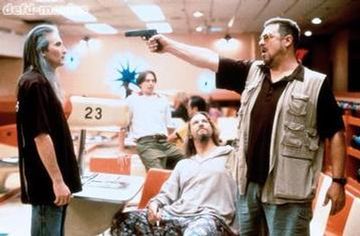 We all love getting raised on the river when a fish hits a runner-runner flush to drag a monster pot. Even though we think we’re immune to tilt, it’s pretty easy to start playing marginal hands with a couple fish at the table. You know they play anything, so your J9s starts looking pretty good, and you cold call. Don’t let the fish put you on tilt– just play your game, calm and cool.
The Dude: Oh, fuck me, man! That kid already spent all the money!
Walter Sobchak: New Corvette? Hardly, Dude. I’d say he’s still got about $960 – $970,000 left, depending on the options.

This quote applies to one of my favorite things I see on party– short stacks pissing away 6 big bets on that “last hand,” capping the flop and turn in a desperate attempt to go all in with nothing. Be aware of players with only 6 or 7 Big Bets in front of them. If you find them 3 betting you, throw in that cap, because usually they’re just trying to get rid of their chips so they can go beat their dog.

This quote goes out to the poker rooms in Southern California, raking off a big bet before the flop, even when only 2 players are in. I like playing in the B&M, but come on guys, that rake is out of control. Don’t squeeze the low-limit players too much, or the well will run dry. Build the bank online, where you don’t tip dealers and the rake is relatively small– then come back to the big games where the rake is almost non-existent.

The Dude: I only said I THOUGHT she kidnapped herself. You’re the one who’s so fucking certain!
Walter Sobchak: That’s right, Dude. 100% certain.

Walter, of course, ends up being right. When you’re close to the nuts and somebody 3 bets the turn or river on you, wait a second before throwing out the cap. If your gut tells you you’ve got the best hand, grit your teeth and reraise.

Nihilist: We thought we were going to get a million dollars! It’s not fair!
Walter Sobchak: Not fair? Who’s the fucking nihilist?

The Nihilist is the typical tourney player who complains about a bad beat. Accept that short term luck is the most important factor in tourneys. Your AA is a big favorite, but not that big. Suck it up and get ready for the next tourney. 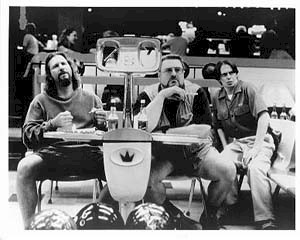 The Big Lebowski: Your revolution is over, Mr. Lebowski. Condolences. The bums lost. My advice is to do what your parents did; get a job, sir. The bums will always lose. Do you hear me, Lebowski?
[The Dude walks out and shuts the door]
The Big Lebowski: The bums will always lose!
Brandt: How was your meeting, Mr. Lebowski?
The Dude: Okay. The old man told me to take any rug in the house.

To all the low-limit pros out there: grinding it out hour after hour in front of the monitor may not be glamorous, but it’s a hell of a lot better than working some dead end job from 9 to 5 every day. Forget the yuppie naysayers, if you build your bankroll and use your spare time wisely, you’ll go a lot farther than the average working stiff.

The Stranger: See, they call Los Angeles the “City Of Angels”, but I didn’t find it to be that, exactly. But I’ll allow it as there are some nice folks there. ‘Course I aint never been to London, and I aint never seen France. And I aint never seen no queen in her damned undies, so the fella says. But I’ll tell you what, after seeing Los Angeles, and this here story I’m about to unfold, well, I guess I seen somethin’ every bit as stupefyin’ as you’d seen in any of them other places.

This quote goes out to the no fold ’em LA hold ’em players, from 2-4 all the way up to $15-30. I’ve heard many times that the $15-30 games at Hollywood Park is looser than the $4-8 game. If you can build a bankroll big enough to handle the swings, and stay off tilt, you’ll be rollin in chips like Demi Moore in “Indecent Proposal”.

Walter Sobchak: Donny was a good bowler, and a good man. He was one of us. He was a man who loved the outdoors… and bowling, and as a surfer he explored the beaches of Southern California, from La Jolla to Leo Carrillo and… up to… Pizmo. He died, like so many young men of his generation, he died before his time. In your wisdom, Lord, you took him, as you took so many bright flowering young men at Khe Sanh, at Langdok, at Hill 364. These young men gave their lives. And so would Donny. Donny, who loved bowling. And so, Theodore Donald Karabozov, in accordance with what we think your dying wishes might well have been, we commit your final mortal remains to the bosom of the Pacific Ocean, which you loved so well. Good night, sweet prince.

To Sean– I miss ya buddy. Anisotropy was not the first blog to pass on to that great blog in the sky, but it’s the one I miss the most. Sean, wherever you are, keep on truckin.

The Dude: Walter, I love you, but sooner or later, you’re going to have to realize the fact that you’re a god damn moron.

This one goes to Phil Hellmuth. Nuff said.

Walter Sobchak: Now that is just ridiculous, Dude. Nobody is going to cut your dick off.

This quote goes to a $5-10 6 max hand I played tonight. Grubby say: “It sucks when a maniac gets a real hand”. I’ll leave out the gory details, but with three jacks on the board, my pocket tens went down in flames to maniac’s AJ.

The Dude: Your money is being held by a kid named Larry Sellers. Real fucking brat, but I’m sure your goons can get it off him. I mean, he’s fifteen.

Don’t cold call the raises of the fish with marginal hands. Yeah you can outplay them after the flop, but there are 8 other players at the table who won’t be loosening up as much as you. As the example above illustrates, sometimes they actually have a real hand.

The Stranger: The Dude abides. I don’t know about you but I take comfort in that. It’s good knowin’ he’s out there. The Dude. Takin’ ‘er easy for all us sinners. Shoosh. I sure hope he makes the finals.

The final quote relates to the zen of poker. When you’re playing low limit poker well, you’re not focusing on tells, calculating pot odds, or putting players on hands. The game just comes to you. You feel it, you KNOW everything that’s going on without calculation. You look at your stack after a while and see that you’ve doubled your buy in. There is such a thing as “trying too hard”. Relax, and let the game come to you.