The Bee’s Knees: The Internet and Daniel Johnston

Why can’t we be out in the open?
Why aren’t we in a square right now?
Why aren’t we talking to people,
letting them know Item 9 exists?
Get it out. Shout off the rooftops:
‘This is great! This is the bee’s knees, Item 9!'”
–Pineapple Express

There seems to be a theme developing here — me professing my love for various things.  First it was America, then street art (although the latter is more of an infatuation).  Today’s post will talk about a deeper love that trumps both of these.

Did you ever wish you were born in another time or another place?  Like a lot of other guys, I always thought I might fit better in ancient times when I could be a gladiator or one of the 300.  I probably would have been ripped to shreds by a lion after tearing my ACL on the arena dirt, but you never know.  But then I spend a Wednesday night with my old lady Internet, and I remember how good it is to be born in 1977 — just old enough to have life without the Internet, but young enough to watch it grow.  And no, I wasn’t watching porn.

Do you realize how lucky we are?  I am doing my best to shout from the rooftops here — THE INTERNET IS THE GREATEST THING EVER.  Sure, it’s not all good… there are plenty of bad things about the Internet, plenty of ways to abuse it, and so on, but the ways in which it already improves our daily lives constantly amazes me.

Last night started with a google search for the guitar chords to the song “True Love Will Find You in the End”.  I had heard Wilco play this song years ago, and I wanted to play it.  Back before guitar chords could be found online, you’d have to sit with your record, or cassette, or whatever you had that could play music and just listen over and over again until you could figure out what the musician was playing.  To do this, you needed the record, an ear for music, and the patience to listen to the song about 50 times in order to figure out the chords.  These days, all I need to do is type in the song name and I’ve got the chords right there in front of me. I’m not arguing that there isn’t value to learning the song the “old school” way, but last night I just wanted to play the song.

Anyway, before I even played the first note of the song, I noticed that it was written by a guy named Daniel Johnston, so I found the original version on Youtube and listened to it.

So I went over to my legal movie downloading device and found the movie, downloaded it, and sat spellbound watching this film about this beautiful, confused, tortured artist, and I was totally blown away.
As a wanna-be artist (I’m aspiring to be an “aspiring artist”), when you see somebody like Daniel Johnston, you just want to let your aspiration expire.  It’s like being a basketball player and watching tape of Michael Jordan for the first time. Not all artists come out of the womb with the top of their head severed shining light out on the world, but Daniel Johnston certainly did. 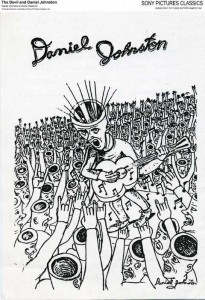 I wrote about street art being interesting because of its purity.  The same “pure artist” aura surrounds Daniel Johnston — the unstoppable desire to express himself without ornamentation or constraint is impossible to miss when listening to his recordings or watching his performances.  I mean the dude is up on stage banging away on his guitar, playing it just barely well enough to provide some minimalist backing for his raw vocals.  But the melodies and the lyrics are great. Forget about guitar lessons or lyrics that rhyme, you get Daniel Johnston’s soul pouring out of his mouth without a filter.  Here I am every day sitting in front of my computer, wondering what to write about, and then I see this kid who does nothing else but create art.  Here is a guy fighting unsupporting parents, a job at McDonald’s, and the demons of manic depression, all the while cranking out thousands of songs (and drawings!).

Back to the Internet.  All of this — finding the chords, finding the video, downloading it and watching it — I did it all in two and a half hours without ever having to leave my seat!  There are obviously positives and negatives to this, but the end result is a huge amount of inspiration that I probably never would have gotten without the Internet.  The song inspired me.  The film inspired me.  In some small way, last night changed my life. Years ago, when youtube wasn’t a well known word and streaming video didn’t exist, I probably never would have heard of this movie.  But now, in a couple of clicks there’s a chance I stumble across something that changes my life.

“But what about information overload?” the critics say. “What about the constant interruptions of Facebook and email, etc.?”

In my college “Introduction to Philosophy” class, we read JS Mill’s “On Liberty,” and I remember finally understanding why people fought so passionately for the freedom of speech:

“On Liberty involves an impassioned defense of free speech. Mill argues that free discourse is a necessary condition for intellectual and social progress. We can never be sure, he contends, that a silenced opinion does not contain some element of the truth. He also argues that allowing people to air false opinions is productive for two reasons. First, individuals are more likely to abandon erroneous beliefs if they are engaged in an open exchange of ideas. Second, by forcing other individuals to re-examine and re-affirm their beliefs in the process of debate, these beliefs are kept from declining into mere dogma. It is not enough for Mill that one simply has an unexamined belief that happens to be true; one must understand why the belief in question is the true one.”

I’m with Mr. Mill on this one — you can argue all you want about the positives and negatives about the internet, but if you believe that “knowledge is power” and that the best idea always wins, it’s hard to think of a better tool than the internet to give access to the world of knowledge and ideas.  In seconds, you can find thousands of pieces of data about whatever you’re looking for. And for the first time ever, just about anyone has the power to publish their opinion for the world to read!  All of this happened in the last 20 years.

And just like everything else in life, without large amounts of luck, it’s very likely there would be no internet.  It also took the hard work and dedication of a bunch of smart people who believed in something.  My Dad’s favorite quote about the Internet + personal computer revolution is, “It’s hard to believe, but the hackers won!”  A group of nerds building computers in the garage managed to change the world forever!  Obviously it wasn’t just these guys, but without them, we might not be living in a world where I can see pretty much any movie I want to in a few clicks.  This is like the opposite of 1984.  Even the Chinese government is having a hard time controlling the flow of information coming from the Internet.  And I don’t even really know what WikiLeaks is, but it seems like it is worth mentioning here. I think that we are seeing the tip of the iceberg when it comes to the impact of the free flow of information. 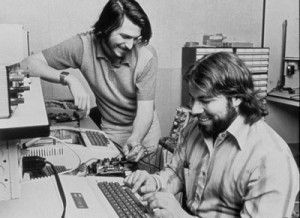 When I was growing up, I thought that “Star Wars” was going to be one of the biggest things that happened to “my generation”.  Then came 9/11.   Nobody will ever forget September 11th, 2001.  But for most people, there are far more days that are forgotten than are remembered.

“Everyone remembers exactly where he was and what he was doing when Kennedy was shot — how places and things and people and even green leaves seemed to be endowed with a special vividness, a memorable weight.  But what the novelist is interested in is the in-between times, the quality of ordinary Wednesday afternoons which ought to be the best of times, but are, often as not, times when places, people, things, green leaves seem to be strangely diminished and devalued.”

The internet gave me a Wednesday night that I will remember.   There are 2 billion people in the world who are connected. Embrace the Internet.  Develop the ability to differentiate good usage and bad usage.  Don’t let your computer push you around.  On the other hand, we should probably get out sometimes too.  As Daniel Johnston sings, “The sun don’t shine in your TV.” 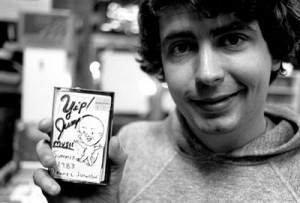