By hdouble March 7, 2011 June 23, 2013 Uncategorized
“If one really wishes to be master of an art, technical knowledge of it is not enough. One has to transcend technique so that the art becomes an ‘artless art’ growing out of the Unconscious.”
–Daisetz T. Suzuki

My interest in the topic took on new life after reading a short book called “Zen and the Art of Archery”.  This short and powerful book, written by a German philosophy professor, is an explanation of Zen through his experiences learning Archery in Japan. On the surface, the book is about how to become an expert at shooting arrows. The deeper topic addressed in the book is enlightenment — the process of becoming an expert in something allows us to gain a deeper understanding of ourselves and the nature of our existence. Why archery?  In order to experience a “transcendent moment,” we must first achieve technical perfection of a practical discipline. Archery is the author’s choice of domain, but he could have chosen playing the piano, calligraphy, or basketball.  The underlying idea here is that for Westerners, transcendence and enlightenment is easier to access through mastery over a practical skill, rather than trying to achieve enlightenment solely through meditation in a secluded cave.

By the way, if you want to hear a poker expert’s take on how this book applies to poker, check out The Professor’s “Poker and Zen” article here. Howard is one of the most amazing people I’ve met, the Larry Bird of Poker, but I could go on forever about the guy so I’ll just refer you to the article and leave it at that. 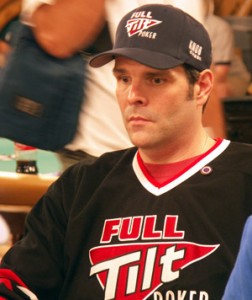 Over the next several posts, I’m going to explore my personal experiences with Expertise in an effort to understand what it means to be an expert and why I think this is an important idea.

After many years of thinking about this stuff, the theme running through expertise, no matter which domain, is “learning the mechanics of a task so well that the mechanics disappear, opening up a deeper form of expression in the mind of the expert.”  This is the notion of “artless art” or “effortless effort” that Zen describes. Some of my favorite expressions of this idea:

–The famous scene from Karate Kid where Miyagi finally shows Daniel how to “wax on wax off”
—Blink — Malcolm Gladwell’s take on how experts develop the ability to “think without thinking.”  The introduction to the book offers great insight into the way that experts tap into their unconscious when making decisions.
–In the climactic scene in the best unintentional comedy ever made, a blind Jean Claude Van Damme defeats Chong Li with his eyes closed 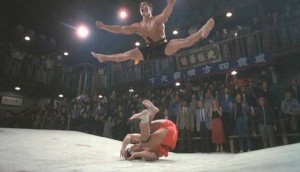 My first brush with expertise

One of my first brushes with expertise came through video games.  I had been playing video games since I was 5 years old… we had both Commodore 64 and Atari.  By the time Nintendo came to my neighborhood years later, I was already pretty good at video games, whether in the Arcade or on my Intellivision.  So there I was,10 years old and putting in lots of hours on Super Mario Bros and any other Nintendo game I could get my hands on. I was pretty good at video games, and prided myself that I could “win” any game within a couple of days of playing it for the first time.  When Mike Tyson’s Punch Out!! came out, I remember buying it immediately and wanting to be the “first” to beat the game among the kids at my elementary school. 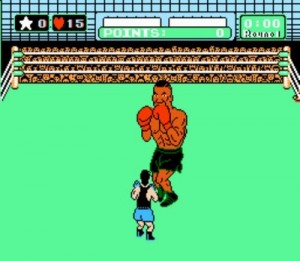 Punch Out!! (I love Wikipedia — I never knew the title had two exclamation points) had a brutal design feature –if you lost to Tyson in the final match, your game ended immediately and you didn’t have a chance at a rematch, so to fight him again, you had to spend an hour beating all the preliminary guys to get back to the match with Tyson.  No “continue” or “try again,” a Tyson loss sent you all the way back to the beginning… Do not pass GO. Do not collect $200.  Fighting Tyson was brutal — basically if you made one mistake you’d be knocked out, and his character was so fast that it took several matches just to get a sense of his rhythm and what the hell you were supposed to do against him.

So you’re 10 years old and fighting this impossible match knowing that you’re probably going to lose and it’s going to take you an hour to get back to Tyson, and he’s beating you so bad that you have no idea how to beat him when you do get back to him… I remember smashing my head against the wall in fury after losing a heartbreaking match in which I was one punch away from knocking him out when I mistimed one of his punches and the lights went out. 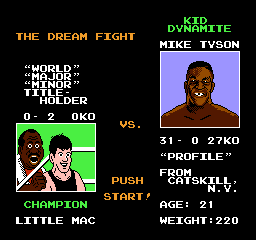 So after about the 10th loss to Tyson, before the lump on my head could finish swelling, something happened. After a moment of doubt (“is it really worth another hour to get back to this guy, lose again, and smash my head through the wall?”), I took a deep breath and something snapped. I don’t know if it was anger, frustration, or raw competitiveness, but I said to myself, “I am not losing this time.” Cue Rocky theme song.

Determined to will myself to victory, I remember confidently mowing through the early opponents (I destroyed “Glass Joe” in record time) and thinking, “something feels different.” The weak contenders were always easy to beat, but this time everything seemed perfect, like I could do no wrong.  Effortless.  By the time I got to Tyson I remember thinking, “this is it, I’m going to beat him this time, I can FEEL it!”  Somehow I just knew.

And I beat him. It seemed easy, but also somehow magical. 10 year old me was ecstatic, celebrating the victory with numerous fist pumps and a good deal of post-victory amazement. I had no idea what had happened, but I had tapped into something deep and mysterious.  For the first time I could remember, sheer willpower had been the driving force behind victory, and I had experienced something that the great athletes had been demonstrating for all of eternity: technical knowledge is not the only thing that matters — with the right combination of skill, desire, and attitude, it is possible to transcend the task itself. 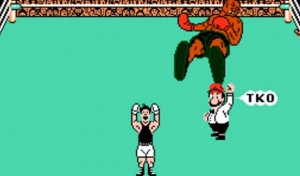 Serious epiphany for a 10 year old playing Nintendo.  I didn’t really get it at the time, but beating Tyson was a good early lesson in expertise. With a lot of practice, I was able to develop the technical skills to beat the easier fighters.  Fueled by the desire to “win” the game, I improved my technical skills and worked my way up to Tyson. Finally facing a “worthy” opponent, I got my ass kicked by Tyson repeatedly until I was forced to give “something extra,” something that would force me to go beyond technique.  And only when I flipped the “I refuse to lose” switch was I able to beat him.

I didn’t really understand any of this at the time, but I did realize that I had felt something new and different during the fight.  I think the “magic” of the fight with Tyson was really feeling “in the moment” — letting go of the desire to win, the pressing of the buttons, and all of the other mechanical things required to play the game… and just “feeling” the fight.  Living in the moment. It was a surprise to me that it wasn’t technical mastery that allowed me to beat Tyson — it was willpower that pushed me to transcend in that 11th match against Tyson and propelled me to the victory that I couldn’t find in the first 10 fights.  I thought that Nintendo games were about pressing buttons in the right sequence at the right time, but for 10 year old me, Zen and the Art of Punch Out!! opened the door to another world.

It all sounds a bit dramatic, but hey, I was a cocky kid and didn’t know anyone else who had finished the game, and at the time, Nintendo was pretty much the coolest thing in my world aside from playing football.

Looking back, beating Iron Mike looks pretty simple, but I challenge anybody to beat Tyson in less than 5 tries (you can play the flash version here — use code 007 373 5963 to cheat and go directly to the final match).

In retrospect, Punch Out!! was a good microcosm for developing expertise, and one of my first tastes of “transcendence.”  Develop a technical skill, take that skill as far as it will go, and then use desire and will to live “in the moment” and break through the artificial ceiling you’d previously hit your head against.  I wasn’t sure what I had discovered, but I knew that I wanted more of it.

Next post: Thoughts on Expertise (Part 2) — Defeated by Def Leppard